Ashbourne Church gateposts have their tops supported by skulls. They all have a skull at each corner.

It is thought that the gateposts were the work of Robert Bakewell one of Derby’s finest craftsmen. They date from 1700 and were set back a few feet from their original position in 1958, during road-widening. 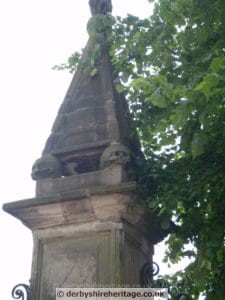 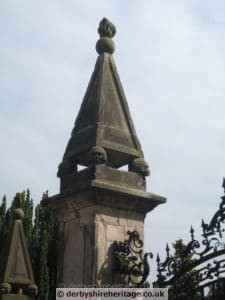 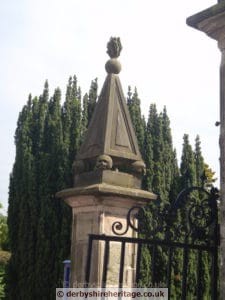 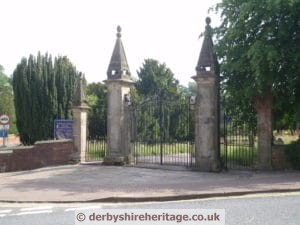 from the Diocese of Derby website –
“Saint Oswald’s was consecrated on the 24th April 1241
The building, in a cruciform shape with the nave noticeably offset from the true, houses many tombs in the Boothby Chapel including that of little Penelope Boothby which boasts the most exquisite carving. Another of the many attractions is the Turnball Window, an Arts & Crafts stained glass window commemorating the deaths of Monica & Dorothea Turnball.
The church has a set of eight bells. These are rung, most unusually from the crossing, for Sunday services as well as at major festivals and events.”

“The church is named after Oswald of Northumbria. A brass plaque in the chapel on the south side of the church commemorates its dedication on 24 April 1241 by Hugh de Pateshull, Bishop of Coventry and Lichfield.

Architecturally, it dominates the small town with its 212-foot spire which was referred to by George Eliot as the “finest single spire in England”. It is said to have been started in 1240 by Bishop Hugh de Pateshull. Construction probably lasted until the early 14th century. It replaced an earlier Saxon church, and possibly a second Norman one. (A Norman crypt was discovered during excavations in 1913.)

From 1837 to 1840, it was restored by Lewis Nockalls Cottingham, and then in the 1870s by George Gilbert Scott, who added the battlements to the chancel.

Until Ashbourne Hall was partially demolished, it and St Oswald’s were the town’s major monuments, standing at either end of the main street. The entrance to the hall’s grounds continued the main street through high gates. What remains of the hall houses the local lending library and some unrelated offices. As they were before the 18th century when the Boothby’s rebuilt and refurbished their home, St Oswald’s and its tower are once again the major landmark, and the church is the town’s main attraction. The church is a Grade I listed building.”