Peeping Tom peeped from the parapet of Derwent Hall’s stables before being rescued when the Hall was lost beneath the Derwent reservoir.

The hall was built in 1692 by the Balguy family and subsequently became the seat of the Duke of Norfolk and in 1932 it was the first stately home to become a Youth hostel.

The front of his hat was chipped by a falling tree.

In keeping with the Youth Hostel connection, the Peeping Tom statue can be seen in the reception of Losehill Hall Youth Hostel on the outskirts of Castleton having been moved from Castleton Hall. 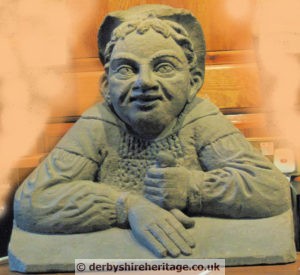