Chesterfield Crooked Spire, St Mary and All Saints, the world famous Crooked Spire Church at Chesterfield.
Construction began in the late 13 Century and was finished around 1360. It is the largest church in Derbyshire and its unusual Spire stands 228 feet from the ground and leans 9 feet 5 inches from its true centre.
At 9 a.m. on 22nd December, 1961 a fire broke out in the North Transept and flames swept through the building threatening the spire. It took two hours to get the blaze under control and the cost of the damage came to £30,000.
The Spire was ‘twisted’ when unseasoned wood was used during its construction with 32 tons of lead tiles placed on top and as the timber dried out the weight of the lead twisted the spire. As the spire was being built at the time of the Black Death in 1349, a theory has been put forward that the original craftsmen may have died. As a result, less experienced men completed the job and they made the mistake of using green timber. There is also a lack of cross bracing in the structure.
There are of course other controversial versions of how the twist was caused and the Devil figures in the most popular version although there are several variations on this theme.
One version is that a blacksmith from the nearby village made a poor job of shoeing the Devil who, lashing out in agony as he passed over Chesterfield, gave the spire a violent kick.
Another claims the Devil was resting on the spire when a whiff of incense from below made him sneeze, and as he had his tail wrapped tightly round the spire at the time this caused it to twist.
A controversial version brings the virtue of the local ladies in to question as it says that whilst resting on the spire the Devil twisted round in surprise because the bride was a virgin.
An even more slanderous version says that the spire twisted when a virgin married in the church but will straighten when another one does.

In the churchyard is an 1824 gas lamp which originally stood in the Market Place.

Old postcards of Chesterfield Crooked Spire can be seen at Old Derbyshire Postcards. 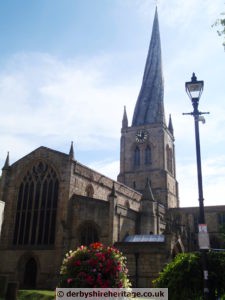