James Brindley (1716-1772), pioneer canal builder and  a self-made engineer, was born at Tunstead,  in the parish of Wormhill near Buxton in 1716 and was engaged by the Duke of Bridgewater to engineer the Bridgewater Canal, opened in 1761. This canal was regarded as the first modern British canal, and triggered an explosion of canal-building. Other canals built by Brindley include the Staffordshire & Worcestershire Canal, the Coventry Canal and the Oxford Canal. He was responsible for such ambitious structures as Barton Aqueduct on the Bridgewater Canal and the three-thousand yard Harecastle Tunnel on the Trent & Mersey Canal. 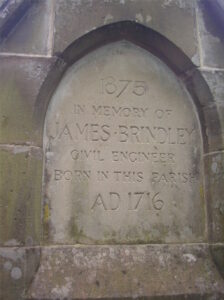 Brindley was the pioneer of what became during the next forty years the canal boom, of which the climax was the ‘canal mania’ starting about 1793, when people sought frenziedly to buy shares in the projected canal companies.

James Brindley was followed by two other local men, William Jessop and Benjamin Outram, who played a great but not yet fully recognised part in the later developments.

Although most of Derbyshire’s eighteenth-century canals are now derelict, there is much to be seen of the work of the pioneers. Dealing with these chronologically, first came that stretch of Brindley’s great Trent & Mersey Canal (the ‘Grand Trunk’) which passes through Derbyshire.

It is still open, kept in order by the British Waterways Board as was –

On 2 July 2012, British Waterways ceased to exist in England and Wales and in its place Canal & River Trust was set up to care for 2,000 miles of historic waterways. 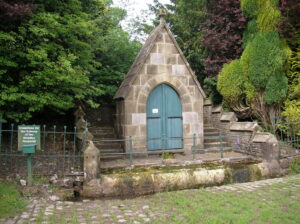 Beginning as a millwright, Brindley designed and built an engine for draining coalpits at Clifton, Lancashire, in 1752. In 1759 the Duke of Bridgewater hired him to build a 10-mile (16-kilometre) canal to transport coal from the duke’s mines at Worsley to the textile-manufacturing centre at Manchester. Brindley’s solution to the problem included a subterranean channel, extending from the barge basin at the head of the canal into the mines, and the Barton Aqueduct, which carried the canal over the River Irwell.

The success of that canal encouraged similar projects: the Grand Trunk Canal, penetrating the central ridge of England by the Harecastle Tunnel, and the Staffordshire and Worcestershire, the Coventry, the Oxford, the old Birmingham, and the Chesterfield canals, all designed and, with one exception, executed by Brindley. In all, he was responsible for a network of canals totaling about 360 miles (580 km). The improvement in communications helped to hasten the Industrial Revolution. Brindley, a self-made engineer, undertook all his works without written calculations or drawings, leaving no records except the works themselves.