Peter’s Stone is a circular limestone dome in the Wardlow Mires, northern end of Cressbrook Dale. It is also referred to as Gibbet Rock and shown on the OS map as Peter’s Stone. 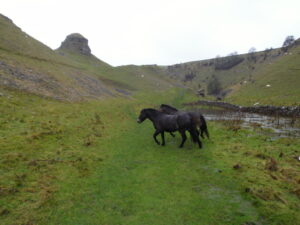 The story is that on New Year’s Day, in 1815 Hannah Oliver, the toll-keeper at Wardlow Mires was murdered for a pair of red boots and Anthony Lingard, a 21 year old Tideswell man, was convicted and executed for the killing. After execution in Derby his body was then hung in chains on the Peter’s Stone but this gruesome practice led to considerable public outcry and it was to be Derbyshire’s last public hanging!

However this local folklore would appear to be wrong as a murderer named James Cook was gibbeted on 1st August 1832 and gibbeting was not formally abolished before 1834.

‘Lingard strangled her with a handkerchief in an attempt to make it look as though she had committed suicide. He stole not only the pair of red shoes but also a sum of money He offered the shoes and money to a young woman who was pregnant by him if she would claim that the child was fathered by another man. The young woman suspected that the shoes were stolen property and refused to accept them. Lingard therefore hid them in a haystack and later recovered them before hiding them in his own house where they were found by the investigators of the crime. The shoes had been made for Mrs Oliver by Samuel Marsden, a shoe-maker of Stoney Middleton. Marsden recognised the shoes and remembered that he had inserted a piece of packing in one of the heels which ironically contained the words ‘Commit No Crime’. It was the discovery of this piece of packing which sealed Lingard’s fate when the heel was opened.
Anthony Lingard was hanged at Derby Gaol on 8th March 1815 and his body brought to Wardlow under military escort. When the escort reached Rowsley, they took a wrong turn and marched on through Beeley along the Duke of Devonshire’s private road instead of turning left to Bakewell. At Chatsworth they were told by one of the Duke’s servants that they could go no further. ‘Duke he may be’ replied the young officer, ‘But I hold the King’s commission. Quick March’. The outcome of this incident was that the road was no longer considered private under an ancient law which stipulated that the passage of a corpse along a road made it a public right of way.
The costs of this horrendous ritual were not insubstantial – £31-5-3 for the investigation leading up to the arrest; £53-18-8 for the gibbeting and £10-10-0 for the gaoler and escort from Derby to Wardlow. Such was the public fascination with the event however that the vicar of Tideswell found none of his congregation in church on the day of the gibbeting but all of them and more at Wardlow where he took the opportunity of delivering a sermon of fire and brimstone under the gallows.
Lingard’s skeleton is alleged to have hung on the Wardlow Mires gibbet in chains until it was finally removed 11 years later on 20th April 1826 after complaints about the gruesome chattering of the bones in the wind. The site of this hanging would have been the so-called Gibbet Field at Wardlow Mires where other hangings are reputed to have taken place earlier, including one of a notorious highwayman called Black Harry who was finally apprehended in Stoney Middleton Dale in the 18th century.

The packhorse trains that were a regular feature in the district into the mid 18th century were a prime target for highwaymen. The best known in this area, Black Harry, operated in the early 18th century at the same time as Dick Turpin was active elsewhere. An old packhorse route is still known for part of its length over Middleton Moor as ‘Black Harry Lane’. Eventually the law caught up with him and he met his own date with destiny, paying the price of his misdeeds at Wardlow Mires.