AULT HUCKNALL is often described as being the smallest village in England with a total of three houses and a Parish Church. It is the St John the Baptist Church that entitles Ault Hucknall to be defined as a village rather than a hamlet – although many disagree with this definition.

The parish of Ault Hucknall, which first appears in 1291, includes the Doomsday settlements of Astwith, Blingsby, Bramley Lane Farm, Hardstoft, Rowthorn and Stainsby. In 1291 it is listed as Hokenhale and Hukenalle in 1428. It is thought that the village name AULT is derived from the French haut meaning high and not a corruption of old and HUCKNALL relating to someone named Hucca.
ASTWITH for many decades was a part of the manor of Stainsby but until the 1200’s there is no mention of Astwith by name. It’s other spellings included Estewyte, Estewayt, Est(th)wayt, Estweit and Eswheyt. Various suggestion as to the derivation of its name include – the place at the east woodland clearing, the ford by the ash trees and the east ford. J E Milner in his excellent book, ‘The Ancient Church and Parish of Ault Hucknall’, suggests that the latter seems the more likely with the ford having been superseded by a bridge on the lane from Stainsby. The booklet also gives much more information of this area.
BLINGSBY GATE was once the entrance to Blaeingr’s farm, Blingsby being the deserted Hardwick Park village. The Domesday Book lists it as Blanghesbi:King’s land, formerly Roger de Poitu.
HARDSTOFT was Hert’s homestead, and is a place name of Old Scandinavian origins. It is named as Hertestaf in Domesday and in 1257 was known as Hertistoft and Harstof in 1609. The name is interpreted as meaning Heort’s toft – toft meaning dwelling.
ROWTHORNE listed around the 11th century as Rugethorn and Ruethorn meaning place at the rough thorn bush.
STAINSBY, named as Steinesbei in Domesday. As the ‘by’ indicates it was a Danish settlement probably from the 800’s and would be interpreted as Stein’s village.

From Kelly’s Directory of the Counties of Derby, Notts, Leicester and Rutland pub. London (May, 1891) – pp.33-34
AULT HUCKNALL (or HAULT HAUCKNALL) is a widely scattered village and parish with a station at Rowthorne, on the Doe Lea branch of the Midland railway, 7 miles south-east from Chesterfield and 5½ north-west from Mansfield and 3½ from Clay Cross station on main line of Midland railway. The parish includes HARDWICK, STAINSBY, HARDSTOFT, ROWTHORNE and ASTWITH, and is in the Chesterfield division of the county, union and county court district of Mansfield, petty sessional division of Chesterfield, hundred of Scarsdale, rural deanery of Chesterfield, archdeaconry of Derby and diocese of Southwell.
the population in 1881 was 747.

From GENUKI
“AULT-HUCKNALL, a parish in the hundred of Scarsdale, in the county of Derby, 6½ miles to the S.E. of Chesterfield, its post town, and 5½ N.W. of Mansfield. It is situated in a pleasant country, and contains the hamlets of Rowthorne, Stainsby, Hardwick, Hardstoft, and Astwith. The living is a vicarage in the diocese of Lichfield, of the value of £168, in the gift of the Duke of Devonshire, who is lord of the manor. The church contains a monument to Anne, first Countess of Devonshire, who died in 1598, and also one in memory of the philosopher Thomas Hobbes, who died herein 1679.”

St John the Baptist Church at Ault Hucknall has a Cavendish Chapel with the tomb of Anne Keighley the 1st Countess of Devonshire (1627) which is very unusual as the Cavendish family were generally buried at Edensor.
It is beneath the Savage window and surmounted by five Muses in Derbyshire alabaster, representing Modesty, Prudence, Love, Obedience and Piety. 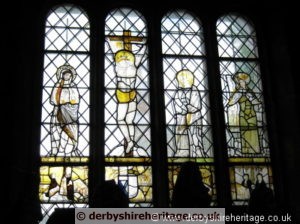 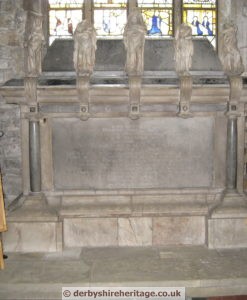 Anne Keighley was the daughter of Henry Keighley and wife of William, 1st Earl of Devonshire.The inscription reads –
‘In this tomb, under the figures of Modesty, Prudence, Love, Obedience and Piety and of the subsidiary and guardian virtues, are placed and preserved the ashes of a most excellent woman, Ann Keighley, daughter and heiress of Henry of Keighley, in the Count of York, Knight. She married the exalted nobleman, William Cavendish, Knight of Chatsworth, (afterwards raised to the Earldom of Devonshire) and bore him three sons, Gilbert, William and James, and as many daughters, Mary, Elizabeth and Frances. James, the youngest, sleeps beside his mother.
William, Earl of Devonshire and Lord of Hardwick, the heir and now the only survivor, who wishes to preserve at the same time the memory of his dearest mother and brothers and sisters, had this monument made.’

It is also the resting place of Thomas Hobbes the great philosopher and secretary to successive seventeenth century
Earls and Dukes of Devonshire who died at Hardwick in 1679.Thomas 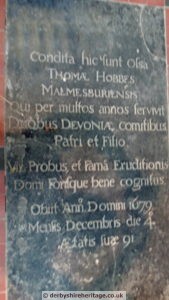 Hobbes was born on Good Friday, April 5, 1588, in a small village just outside Malmesbury Wiltshire. The son of a local clergyman his modest origins bore little indication of the later influence he was to exert on Western thought. His writings ranged from natural science to politics – and even poetry – with many arguing his works embrace the great transformations of the age in which they were produced. Yet for all this the story of Hobbes can be observed to begin in a twist of fate that led to his introduction to one of England’s richest and most powerful families.
Coming up to study at Magdalen Hall, University of Oxford, in 1602 at the age of 14, the precocious Hobbes was to acquire his degree five years later. A diligent and perceptive student he caught the attention of the principal of his college. Thus, he was duly recommended to William Cavendish as a potential tutor for Cavendish’s son. Hobbes was offered the post, moving in the early winter of 1608 to Derbyshire to join the Cavendishes at Hardwick Hall. From then on, the fortunes of the Cavendishes and the man who was to become one of the greatest thinkers of the 17th century were to be intimately linked for the next three decades.
Thomas Hobbes died at Hardwick in 1679 and was laid to rest at Ault Hucknall parish church.The Latin inscription on the black marble slab reads –
‘Here are buried the bones of Thomas Hobbes of Malmesbury, who for many years, served the two Earls of Devonshire, father and son. A sound man and well known at home and abroad for the renown of his learning. He died in the Year of our Lord 1679 on the 4th day of the month of December in the Ninety first year of his age.‘ 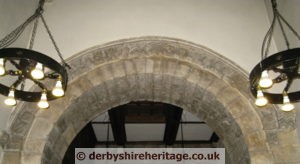 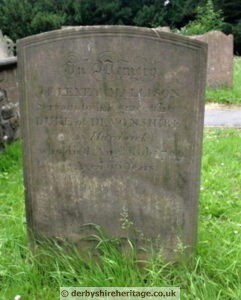 This is probably the churchyard’s oldest table tomb being dated 1690 and is the last resting place of Robert Nuttall and his widow.
Robert was buried on 1 Sept

1690 and his widow on 1 Jan 1719 as indicated by the inscription RN 1690 : 1719.
Robert Nuttall was a Cooper by trade according to Chatsworth Archives hence the tomb is carved with a representation of a collection of tradesman’s tools including an axe, a hammer, a saw and a compass.

A weaver’s tomb inscribed with the tools his trade can be seen St Helens Church in Darley Dale.

This small and remote Church has several other interesting and unusual features.
Outside on the west wall is a blocked door with a large tympanum and lintel.

The tympanum is carved with the legend of St Margaret of Antioch with the Agnus Dei and a small animal. 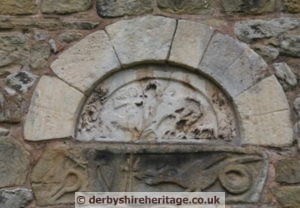 The lintel portrays St George and the Dragon, separated by a cross. However according to the church booklet – ‘since the character is expelling the dragon from heaven, scripturally this may be St michael the Archangel rather than St George. The combatant is in Norman armour, up to three hundred years earlier than the adoption of George as the patron saint of England,’
According to Pevsner in THE BUILDINGS OF ENGLAND – DERBYSHIRE
Tympanum over the blocked doorway – ‘a highly barbaric tympanum showing a centaur (which may be St Margaret emerging from the body of the Devil) on the left and the lamb and cross on the right.’ 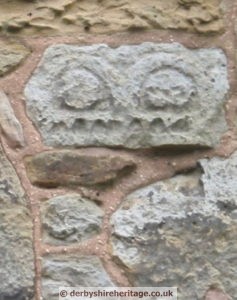 By the side of this small window is a strange piece of carved stone which is too worn to decipher. 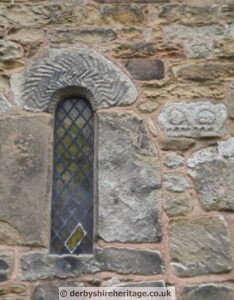 A small window with incised zigzag in the arch – ‘rather Saxon than Norman looking.’ according to Pevsner.

The broken lintel – ‘a man (St George?) fighting a dragon.’ 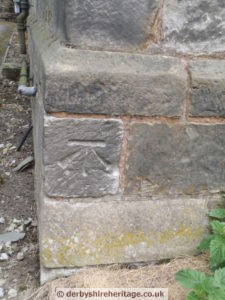