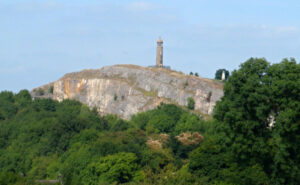 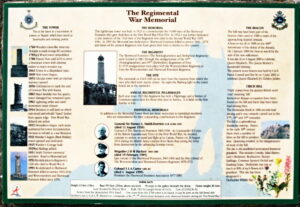 THE TOWER
This is the latest in a succession of towers or Stands’ which have stood as landmarks and viewing points.
1760 Wooden tower-like structure. Probably to mark George III’s accession.
1785(c) Wood tower demolished.
1788 Francis Hun paid £210 to erect a limestone tower with external ladder to reach wooden top. 1843 Tower in a dilapidated state.
1849 New tower begun.
1851 Circular tower with an internal stairway opened.
1856 Celebrations to mark the end of Crimean War with Russia.
1882 Major landslip into the quarry, tower damaged but remained open.
1902 Lightning strike and earth movement cause closure.
1914 Decision to sell land on which ruin stood and rebuild Stand further from quarry edge First World War delayed any action
1922 Demolition began, each stone numbered for tower reconstruction. Decision to rebuild as a war Memorial
1923 Monday 6 August (Bank Holiday) tower opened and dedicated.
1925 Warden’s Cottage built. 1929(c) Railings added.
1931 Smith Dorrien memorial unveiled. Road to Memorial laid.
1952 Re-dedication to Regiment’s 1520 who died in World War 11.
1991 Re-dedicated to Sherwood I Foresters killed in service 1945-1970 and Worcestershire and Sherwood Foresters killed since 1970.

THE MEMORIAL
This lighthouse tower was built in 1923 to commemorate the 11409 men of the Sherwood Foresters who gave their lives in the First World War 1914-1918. In 1952 it was further dedicated to the memory of the 1520 men of the Regiment who died in the Second World War 1939-1945. In 1991 the Memorial was dedicated to Sherwood Foresters killed in service 1945-1970 and those of the present Regiment who have given their lives in Service to this country. 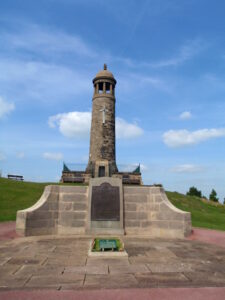 THE SITE
The memorial Crich Stand on Crich Hill can be seen from the counties from which the men who died were mainly drawn – by night the flashing light in the tower would act as the reminder.
ANNUAL REGIMENTAL PILGRIMAGES
Each year since 1923 the Regiment has held a Pilgrimage and a Service of Commemoration here for those who died in Service. It is held on the first Sunday in July.
INDIVIDUAL MEMORIALS
In addition to the Memorial Tower there are three memorials to individual members who are remembered for their outstanding contributions to the Regiment.
General Sir Horace L Smlth-Dorrien GCB GCMG DSO
(died 12 August 1930)
Colonel of The Sherwood Foresters 1905-1930. As Commander D Corps of the British Expeditionary Force in the First World War, he decided, contrarv to orders, to stand and fight at Le Cateau, France on 26 August 1914 during the British Army’s retreat from Mons thus saving the Army from destruction by the advancing German forces.
Brigadier J H M Hackett DSO OBE
(died 19 February 1985)
Last colonel of the Sherwood Foresters, 1965-1969 and the first colonel ot The Worcestershire and Sherwood Foresters Regiment 1970-1972.
Colonel SLA Carter OBE MC
(died 4 August 1999)
President the Sherwood Foresters Association 1977-1985. 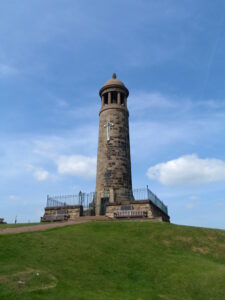 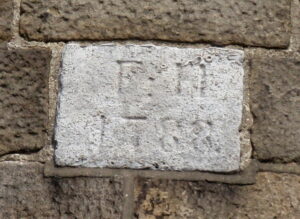 Architect was Lt Col A W Brewill DSO commander of the 1st/7th (Robin Hood) Battalion of the Sherwood Foresters during the First World War.

THE BEACON
The hill may have been part of the beacon chain used in 1588 to warn of the approaching Spanish Armada. A beacon was lit in 1988 on the 400th Anniversary of the defeat of the Armada.
On 1 January 2000 the beacon was lit for the start of the new millennium.
It was also lit on 4 August 2000 to celebrate Queen Elizabeth, The Queen Mother’s hundredth birthday
The present stone beacon was built by Crich Parish Council and first fit on 3 June 3002 to
celebrate Queen Elizabeth 0’s Golden Jubilee.

CRICH HILL
‘Crich’ comes from the ancient British word ‘cruc’ meaning hill’.
Items from Roman occupation have been found on the hill and there may have been lead mining then.
The Domesday Book in 1086 records lead mining and it was certainly carried out in the 17th, 18th and 19th centuries.
The hill is a carboniferous limestone outcrop. Hence in the early 18* century there were a number of
kilns on the hill to produce lime. Quarrying resulted in the disappearance of most of the hill.