The present Moot Hall in Chapel Lane, Wirksworth was built in 1814 to house the Barmote Court, which was set up in 1288 to enforce lead mining laws, which were said even at that time to be of great antiquity. It is almost certainly the oldest industrial court in Britain, and possibly in the world; it still sits twice a year at the Moot Hall.
The previous Moot Hall was built in 1773, in the Market Place in front of the Red Lion, by the direction of the Chancellor of the Duchy of Lancaster. However noisy behaviour by the miners caused that building to be demolished and the new Moot Hall to be constructed in Chapel Lane. The two bas-relief plaques of local marble, showing the miner’s scales, pick and trough, were removed from the old Hall and reset in the facade of the new building. Today, despite exposure to the rough climate of the Derbyshire mountains, they are as clear-cut as the day they were put up, in sharp contrast to the scaling wall behind them. The plaque over the door reads:

In Medieval times, an area known as the Kings Fields, about 115 sq miles in size, of which Wirksworth was the centre, was established as a free mining area.
Anybody was allowed to set up as a miner and work by very liberal rules permitting them to search for lead ore anywhere but in churchyards, gardens, orchards and highways. The miners had right of access, water and space to mine and dump their waste without regard.
They did however have to pay a royalty on all ore mined, of one thirteenth to the Crown (known as a lot) and one tenth or tithe to the Church. The Barmote Court was established to deal with disputes and claims arising from lead mining and to collect the royalties due. The Barmote Courts were set up in 1288, their jurisdiction covering both to the crown lands of the Duchy of Lancaster and those under individual ownership, comprising seven clearly defined districts. Great Barmote Courts with wider powers were in place by the fifteenth century, meeting at Easter and Michaelmas. The courts had twenty-four jurors, and were run by the Barmaster and a steward. 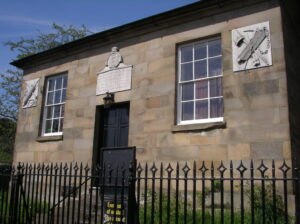 They sit before a famous brass measuring dish, made in 1509 and normally chained to a wall of the building.
The Dish is engraved on both sides and the inscriptions read :- ” This dish was made the iiij day of October iiij yere of the reigne of Kyng Henry the viij before George Erle of Shrowesbury Steward of the kyngs most Honourable household and allso Steward of all honour of Tutbury by the assent and consent as well of all the Mynours as of all the Brenners within and adioyning the Lordshyp of Wyrkysworth Percell of the said honour. This Dishe to Remayne In the Moot Hall at Wyrkysworth hanging by a cheyne so as the Merchauntes or Mynours may have resorte to the same at all tymes to make mesure at the same ”.

Owing to the progress made in modern mining, many of the customs and much of the procedure have now become obsolete. There are two Barmote Courts, one at Monyash covering the High Peak, and one at Wirksworth covering the Low Peak. In 1814, the Monyash court moved to Wirksworth, and since 1994, the two have met together, once a year, in April. In line with tradition, bread, cheese, clay pipes and tobacco are provided at the meetings, and a representative of the monarch who is the Lord of the Field attends.

The Courts recorded the claims, set out lengths of ground, or meers, along a vein to its finder, and settled disputes, which were numerous, that arose between miner and miner, and between miners and landowners. They also collected the royalties and tithes that were payable to the Crown and to the Church.

When a miner discovered a new vein, he had to ”free””Lord’s Meer”. All the ore from this meer went to the mineral lessee. Beyond the Lords Meer, subsequent meers were called ”Taker Meers”. All the lead ore produced from the mine was measured by the Bar Master, who collected every thirteenth dish of ore for the owner of the Mineral Duties. This duty was called ”Lot”. Another payment the miners made was that of ”Cope”. This fixed sum allowed them to sell their lead ore to any agent or smelter of their own choice. Nine dishes made a ”Load”, and four loads weighed around one ton.