Barlborough is listed as Barleburh in 1002 and Barleburg in Domesday of 1086 which records – In Barleburg (Barlborough) and Witewell (Whitwell) Leofnoth had 6 carucates of land taxable. Land for 8 ploughs. Now in lordship 3 ploughs. 10 Freemen, 10 villagers and 36 smallholders who have 8 ploughs. A priest and a church; 1 slave; 2 mills, 3s; meadow, 3 acres; woodland pasture 2 leagues long and 1 wide; underwood 1 league long and 1 wide. Value before 1066 and now 6. Robert holds it. In Clune (Clowne) 2 bovates of land taxable. It belongs to this manor.The Saxon burg would normally indicate a fortified place and would follow a personal name but no suitable name is known. Possibly the name is derived from Saxon as the first part of the name could be barleah or boar woodland clearing.

Two families, once the most powerful and influential in the area, were the Protestant Rodes and the Roman Catholic Poles. The former properties of both families are less than 2 miles apart. Barlborough Hall in landscaped parkland is the most impressive. Built by Francis de Rodes, a leading judge, in 1584, it is an unusual square Tudor mansion with octagonal turrets at each corner.

Francis de Rodes is also responsible for Barlborough Old Hall and his descendants built Barlborough School while the Pole family donated the 18th century almshouses in 1752. At a time when being a practicing Roman Catholic was fraught with danger the Poles, of Spinkhill Hall and Park Hall had to be very careful when observing their faith as they had to avoid the priest-hunters. Interestingly Barlborough Hall now serves as a preparatory school for Mount St Mary’s Roman Catholic College that is based at Spinkhill Hall.

BARLBOROUGH HALL Built by Francis de Rodes, a judge in the Court of Common Pleas it is dated 1583 on the porch and 1584 on the Great Chamber overmantel.
It is an unusual square Tudor mansion with octagonal turrets at each corner. Francis de Rodes was also responsible for Barlborough Old Hall, which is in the village, and his descendants built Barlborough School. He died at his residence at Staveley Woodthorpe a few years after the Hall was completed.
It passed through several owners eventually being sold to the Jesuits in 1938 but the Army used the Hall during the Second World War and afterwards returned it to the Jesuits. It is now a private School, where it is said The Grey Lady walks the corridors.

BARLBOROUGH PRIMARY SCHOOL Built by the Rodes Family of Barlborough Hall the school was opened in 1870. It is located in the centre of the village and for over a century provided education for the children from the village and the surrounding area. Mr Hodgson was the first headteacher. In the year 2000 under the headship of Graham Hadley two new classrooms were built to accommodate the extra children moving into the village.

GOLDEN GATE MEMORIAL
This Victorian gritstone and mosaic archway was erected in 1869, as indicated by the date in Roman Numerals MDCCCLXIX, by William Hatfield de Rodes in memory of his wife Sophy Felicite de Rodes who died in the same year. It provides the entrance to a Garden of Remembrance built in 1951 as a tribute to those lost in two World Wars. 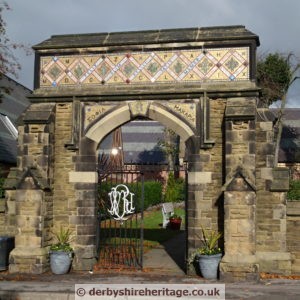 The mosaic contains lettering from three different languages – Greek, Hebrew and Latin.
The top horizontal lettering ‘MIZPAH’ is the Hebrew word meaning ‘the Lord watch twixt me and thee whilst we are absent from one another.’ MIZPAH goes back thousands of years, symbolizing a sanctuary and place of hopeful anticipation, a place where seemingly impossible may happen as of divine intervention or an inspiration.Diagonal lettering is Latin (in four diagonal strips) and reads ‘FELIX/OLIM/FELICI/TATIS/MEMOR’, it is a pun on Sophy’s second name Felicity, meaning approximately ‘once happy man mindful of past happiness’.

Underneath this is the date in Roman Numerals MDCCCLXIX (1869).Lettering on the archway ‘SOPHIA MAKARIA’ is Greek and translates to ‘dearest wisdom’ but is another pun on the Christian name of Sophy.
The keystone has a monogram SFR on it in mosaic and monograms WHR and SFR also appear in each half of the ornate cast iron gates.

BARLBOROUGH LITTLE SCHOOL
In 1798 AD the de Rodes family allowed the church to form a poor school.
A barn was converted to house the ‘Little’ school. In 1874 it was changed to, and served as, an infant’s school until 1928. 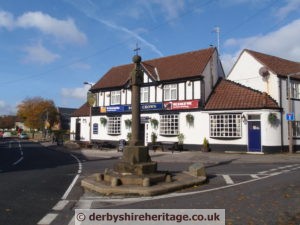 This was the only inn registered by the surveyor J. Dickinson in 1729 that belonged to the De Rodes estate. 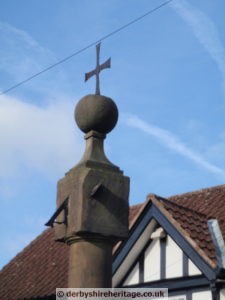 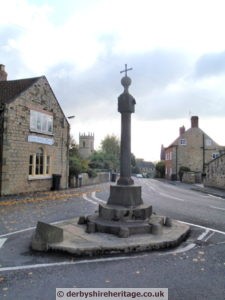 The Cross erected at the junction of Church Street, Park Street and High Street, was the centre of village activities for hundreds of years. The base is thought to be Norman, but more likely to be 14th century with the column being added in the late 17th century. A plaque at the base of the cross reads “This plaque was erected to commemorate the successful campaign to keep Barlborough in Derbyshire (1969 to 1971)”.

THE OLD HALL
Rubble-built ‘H’ shaped house built (or at least started) on the site of an older mansion in the late sixteenth century, then rebuilt early in the seventeenth century by the Rodes family. It is thought that the house was probably originally built not long before 1583 and that John Savile was then Sir Francis Rodes’ steward, a position he may have held until 1594. 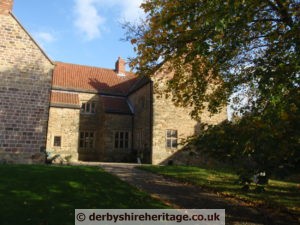 Initially a seat of gentry, today after restoration in the 1980’s it is a private residence.

PARK FARM
Park Farm the Dower house with a Tithe Barn in the yard, wasbuilt for Sir Francis Rodes prior to Barlborough Hall being built. 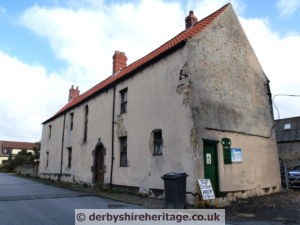 This long house was made up of several small houses, with a larger part being occupied by Sir Francis and his family. During renovations, buttons from Cavaliers’ uniforms were found in a large hole, where they must have been hidden.

PARISH CHURCH OF ST JAMES
Built in the mid 12th century on or near the site of an earlier Saxon church. The northern part of the church is the oldest part of the building. The embattlements and pinnacles were erected in 1776 with stone from Roche Abbey and Steetley at a cost of £98-8s-81/2d.

THE GEORGIAN RECTORY
This was built in 1792 by the Rev. Peter Reaston, on old Glebe land surrounded by mature ash, beech and chestnut trees. 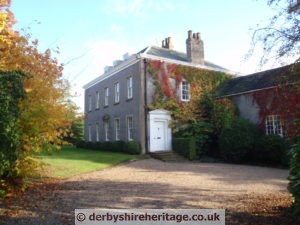 On the south side of the building are two full height bow windows, which shed light into a perfect oval dining room. A new stone rectory was built nearby. 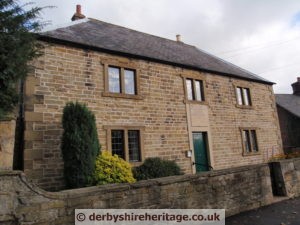 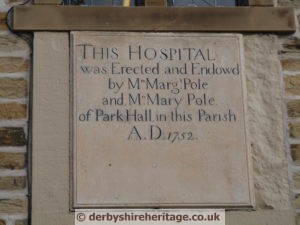 Built in 1752 by Margaret and Mary Pole to house six poor parishioners. They received 2/- per week each and an allowance of coal per year. It was modernised in 1980’s and now contains four flats.

THE DE-RODES ARMS
This coaching inn was known from around the late 18th century as ‘The Horns Inn’. Then around 1835 the name changed to the ‘Rodes Arms’ and finally in 1840’s to the ‘De-Rodes Arms’. 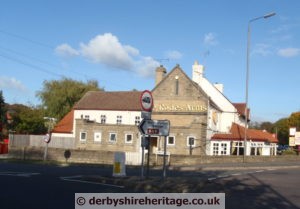 In 1907 the landlord owed the brewery some £60, a bailiff sent to collect the money owed was shot by the landlord and fatally wounded, the landlord later turned the gun on himself. 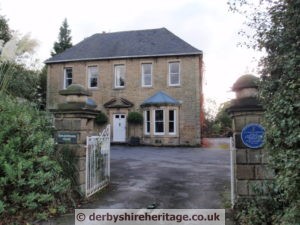 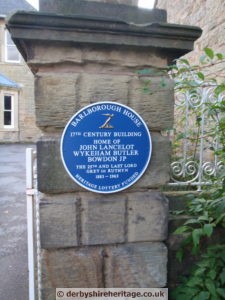 This distinguished late Georgian House was one of the houses belonging to the Bowden Family. The last Bowden to inhabit the house was Lord Grey De-Ruthyn J.P. An amicable and kindly peer, who was greatly respected by the locals. He died on the 25th October 1963 aged 80 years.

THE TOWN’S WELL
In the 1800’s Barlborough was classified as a town. The ‘Well’ was a most important source of water, and it’s source is a spring that rises in Barlborough Park. One of the stone troughs was thought to be an ancient font. A large and a small round trough were removed from the well site and are now housed in the church porch. 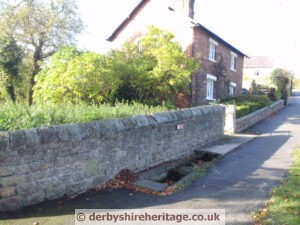 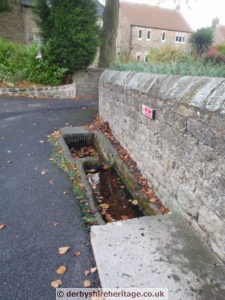