Longshaw Lodge was built in 1827 for the Duke of Rutland (one of the county’s principal landowners) as a shooting box for his 11,533 acres.

from House and Heritage –

While the original ‘shooting box’ may have been modest the late nineteenth century additions turned Longshaw Lodge into an elegant aristocratic country house. Nowadays, the appearance is odd in that the irregular building has five different gables and, despite being two-storeys throughout, is of differing heights. Typically made of ashlar and coursed square gritstone it is defined with a tall four-storey square tower at the rear with embattled parapet. Adjacent to the range is a chapel made of regularly coarsed gritstone with ashlar dressings and a stone slate roof. Behind the lodge complex is a former ice house, circular in shape, now dark and empty, and covered with coarse grass.

During the Duke of Rutland’s time the building was offset with fine ornamental gardens and private walks and driveways across the estate. Rhododendrons were planted close to the building to provide flowering as well as cover for game birds. Elsewhere, a series of nine smaller lodges were built to house the Duke’s many gamekeepers. 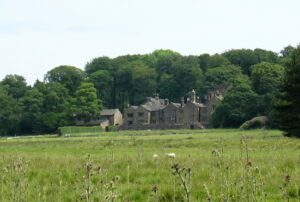 The estate was sub-divided into many different lots. Lot 1 contained the lodge and all of its park-like grounds plus an area of land known as Lawrence Field that was described as “well heathered picturesque moorland”. This 747 acre plot is what today is referred to as the Longshaw Estate. 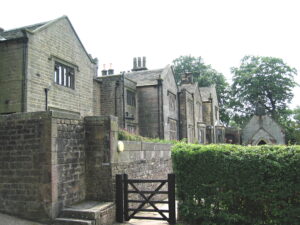 Sheffield Council purchased 3,000 acres of moorland at this auction, primarily for the collection of water but in 1931 they handed over the Longshaw Estate to the National Trust for the sum of £14,000 and today it is still owned and managed by the National Trust.