Thorpe’s church of St. Leonard was founded in Norman times but may well be older. It was originally a chapelry of Ashbourne and the Taxation Roll of Pope Nicholas IV, in 1291, makes no mention of a separate parish of Thorpe. The first record of such independence comes with the institution of Ralph de Cressi as rector, in 1299. Thorpe church has a squat Norman tower, which possibly dates from the transitional Saxon-Norman period, the division of the belfry windows into two lights, recessed from the main arch, is a typical Saxon touch. 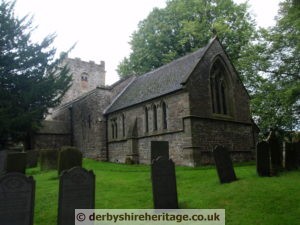 The unaisled nave, with its projecting south porch, dates from the early 14th century suggesting that the original nave might have been of timbered construction, dating from Saxon times. 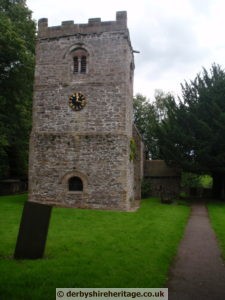 Inside Thorpe church, the font is said to be one of only three Derbyshire tub fonts, which are undoubtedly from the 11th century. The chancel was rebuilt in 1881, when the vestry was also added. In the sanctuary is the tomb of John Millward (1632), with the tiny figures of two daughters. The 17th century tomb of John Milward was partly destroyed during restoration but in front of it, are engravings of his 2 daughters dressed in gowns with embroided bodices and his 2 sons in cloaks and wide topped riding boots. Both the sons were soldiers, one a colonel in the service of King Charles the First.
John Millward served Charles I as a colonel, and subsequently bought the manor at Snitterton in the parish of Darley Dale. He died in 1670, leaving only daughters and the eldest married Charles Adderley, thus taking the moiety of Snitterton and the Manor of Thorpe into the Adderley family. The church also has a Breeches Bible in which Adam and Eve wear breeches rather than the traditional fig leaves.

An unusually tall sundial sits in the churchyard and arrow sharpening grooves can be found on either side of the porch doorway.

The south porch of St Leonard’s church in Thorpe has some interesting grooves on either side of the doorway – these are arrow sharpening marks.

Since the 14th century, after the black death had seriously reduced the number of available archers needed to protect king and country, a general decree was passed ordering Sunday afternoons to be set aside for archery practice, and those marks were made by the sharpening of arrows.

Edward III, finding archery was being neglected, ordered men to stop playing football and other games to practice archery instead. The people kept their arrows at home, but generally living in wooden houses had no means of sharpening them and found the stone porch at the church the most convenient place. Shooting at butts took place after the Sunday service, usually at the bottom of the churchyard.

A sundial tops this pedestal in the churchyard of St Leonard’s at Thorpe north of Ashbourne, and as it is too high to be read by pedestrians it is safe to assume it was designed for horse riders. As it stands among the gravestones one must also assume it is not in its original position. Furthermore the gnomon which casts the shadow is set at an angle of 35 degrees exactly whereas Thorpe stands on altitude 35 degrees three seconds. The design of the sundial is an exact science and this one was made by Whitehurst and it is unlikely that this famous Derby clockmaker would make such a mistake, perhaps these three angle seconds would make little difference. However it is not in situ and it is a mystery as to where it stood originally. 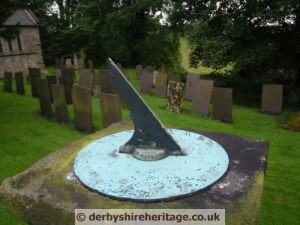 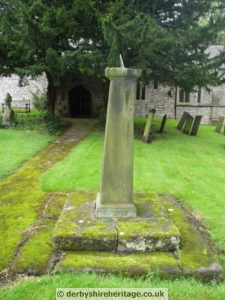