Part of Totley Tunnel is in Derbyshire and part in west Yorkshire, the Derbyshire portal is in the Derwent Valley at Grindleford Station. There were many problems to overcome during its construction not least of all was excessive volume of water.

Horizontal tunnelling began at the Grindleford Totley Tunnel entrance on 27th September 1888, but had to be halted from June to August the following year while a drain was built to carry away water.

At the Totley end, headings were being driven from the shafts, but work had to be frequently abandoned while water was pumped out.

Work was again halted, for six weeks, in the summer of 1890 while a dam was built across the tunnel to allow the building of a better drainage system, tunnelling recommencing on 11th August.

At the Grindleford end the bore had reached a length of 1800yds (1.5km) when, on November 16th, a stream broke through the roof, requiring the construction of yet another drain.

The tunnel was lined throughout, mainly with brick, some thirty million bricks having been used. The tracks had been laid by 2nd September 1893, and the line was opened to goods traffic on 6th November that year. Passenger services began on 13th May 1894.

Trains entering the eastern entrance have to climb several steep gradients of up to 1 in 100 before reaching a short level section and the summit. The remaining 2,000yds (1.87km) fall at 1 in 1,000. The tunnel is not completely straight, the tracks entering the Derbyshire portal on a curve of half a mile radius. At 3ml 950yds (5.7km) it is, after the Severn Tunnel, the second longest rail tunnel in Britain. 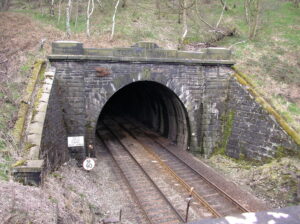