INDEX of ANCIENT DERBYSHIRE CROSSES
Ancient Derbyshire crosses are often found in many churchyards and were intended to sanctify the churchyard and provide a communal memorial to all the dead of the parish.
At the top of the shaft was either a cross or a tabernacle.
Many survive only as a base and part of the shaft, because the cross was often destroyed by iconoclasts.

Preaching Crosses
In the 6th and 7th centuries, wooden crosses marked the spots where priests or monks preached to the local community.
The wooden cross was replaced by a more permanent stone cross, around which services were held.
Later still a wooden church might well have been erected.

There are also many market, village and wayside crosses. 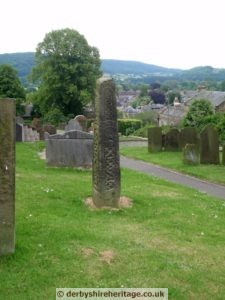 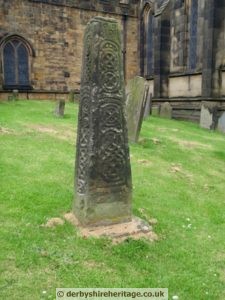 from ‘Crosses of the Peak District’ –

Beeley Cross
This wayside cross has had an interesting recent history. In the grounds of Holt House in Two Dales about a mile north-east of Darley Bridge there once stood an ancient cross-shaft. There are two differing explanations as to how the cross came to be in this position, but both follow similar lines. The first explanation is that the shaft was discovered at some date during the nineteenth century in the fields near Burley Fields Farm (SK276642) by farm workers who found it lying under two feet of earth. The owner of the land at the time was also the owner of Holt House and he had it brought there and set up on a solid base. In another account the cross was found in the 20-acre field about 600 yards northwest of Screetham Farm House near Gladwin’s Mark Farm beside Beeley Lane. This would be in the area SK299672. Either or neither of these explanations might be true; the second would lie beside the Chatsworth to Alfreton road which probably follows the same line as an earlier packhorse track, a typical site for a roadside cross, and therefore the more likely. Burdett’s map shows an old track to support this suggestion and fails to show a similar track passing close to Burley Fields Farm.
Beeley Moor Cross in Bakewell Churchyard
G.H.B. Ward was in no doubt as to the original situation of the cross. On the reverse of document F17L in Sheffield Library he wrote:
“The Saxon Cross In Holt House grounds at Darley Dale and described by T.L.Tudor in Derbyshire Archaeological Journal in 1936 was not found where stated but in the Twenty Acre Field about 600 Yards North west of Screetham Farm House and as I proved on the spot with S.O. Kay (who was told by a retired gamekeeper). It is the first Saxon Cross which I have proved…..and came from beside the historic bridle road. It is beside the Chatsworth Alfreton bridleway as marked on this map. This history must be corrected. Possibly the owner of Holt House did not wish the site from which he obtained the cross to be known and informed Tudor wrongly.”

Clifton cross base
In the garden of a Thorpe private house stands the base of the Clifton Cross. This was originally from near Ashbourne, on the road from Ashbourne to Lichfield. It formerly stood at SK168453 and was a square section cross as can still be seen from where it was leaded into the base. Originally there was a face carved on each corner but these are now so badly eroded as to be almost unrecognisable.
There was also another cross at Clifton, the Clifton Butter Cross which was outside the Cock Inn in the 1960’s. It was plain, cylindrical and about 16 inches high. It has since disappeared.

Prev
Next
↑
Please Don`t copy!!! Just ask if there is anything that you want