St Peter’s Church, Hope is Grade I listed. The Domesday Book records that Hope had a church although the present parish church, the Church of St Peter, dates from the 14th and 15th century with modifications to the chancel dating from 1882. Wikipedia

The church dates from the early 14th century. There were restorations in 1728–30 which included the rebuilding of the tower. A subsequent restoration was undertaken by Alfred Hill of Litton, Derbyshire, in 1887 when new windows were inserted and the floor was relaid. A new clock with chimes was inserted in the tower.

A further restoration of St Peter’s Church was carried out on the chancel in 1908 by Charles Hadfield of Sheffield, when five stained glass windows were inserted.

A gargoyle is a carved stone, often a grotesque figure with a spout designed to convey water from a roof and away from the side of a building.
The term originates from the French gargouille, originally “throat” or “gullet”; or Latin gurgulio, gula, and similar words derived from the root gar, “to swallow”, which represented the gurgling sound of water (e.g., Spanish garganta, “throat”; Spanish gárgola, “gargoyle”).
A chimera is also a carved grotesque figure but in this case it does not work as a waterspout and only has an ornamental or artistic function. Often these are also usually called gargoyles but to be strictly correct this is wrong.

Anglo-Saxon cross
The church has two ancient crosses in its grounds. The shaft of a sandstone cross dating from the Anglo-Saxon period stands seven feet high and is carved on all faces. The cross may well have originated in the church grounds and a possible base now supports a sundial, but from the English Civil War until 1858 it was hidden in the village school. The stump of the Eccles Cross, originally near Eccles House, south of Hope, is also in the graveyard.

St Peter’s Cross in Hope Churchyard
There was a church and priest in Hope before the Norman Conquest, nothing remains of the Saxon church except the cross mounted in a modern base. 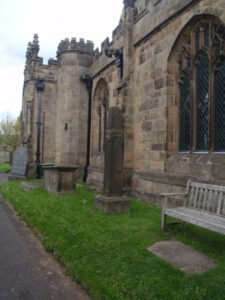 It is believed to date from the time of King Alfred, was hidden on the fabric of Hope School from the time of the Civil War until 1858 when it was discovered during demolition of the school house.
Its excellent state is due to it having been buried in a wall for two hundred years and close by the sundial and part of a guidestoop.

Opposite the South church door is a calvary of five octagonal steps with a sundial pillar mounted in an octagon base on top. The base has a square hole in it which would accommodate the Saxon cross shaft. It is supposed that it was once mounted on the calvary but this is more typical of a market cross. 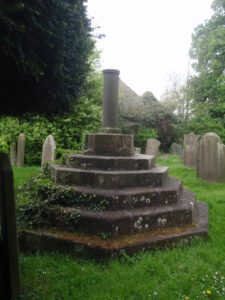 Eccles Cross now stands in Hope Churchyard but it was originally a wayside cross standing at SK175831.
As stone churches came to be built, ‘Holy crosses’ were placed along outlying tracks to guide travellers to them and this cross was sited on an old track leading directly to the church.
When the Rev. Cox was examining crosses in 1904 he refers to it as:
“another medieval base and part of a shaft in a field on the high ground to the south of Hope Church.” 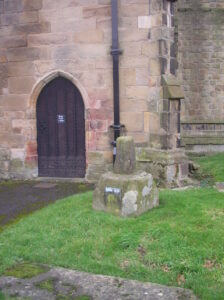 A guide stoop (which seems to be a piece of the original) was found in the vicarage garden and is set onto a stone gatepost as can be seen by the presence of a metal latch.