Alfreton milepost is located at the A61 cross roads with Church Street and High Street in Alfreton.
It states the obvious but must be the only Derbyshire milepost to do so. 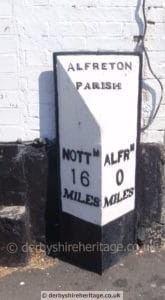 More information can be found on the Milestone Society website – “‘Milestone’ is a generic term, including mileposts made of cast iron. Such waymarkers are fast disappearing; around 9000 are thought to survive in the UK. Most were removed or defaced in World War II to baffle potential German invaders and not all were replaced afterwards. Many have been demolished as roads have been widened, or have been victims of collision damage, or have been smashed by hedge-cutters or flails.”