Vagabonds in Alport are warned by a sign referring to the “Vagrancy Act 1824” which was introduced to deal with specific problems in England following the Napoleonic Wars. Many soldiers were discharged and had no jobs and no accommodation and at the same time there were a large number of economic migrants from Ireland and Scotland who had travelled to England, and especially London, in search of work.

As a result The Vagrancy Act of 1824 was introduced which made it an offence to sleep on the streets or to beg.

The Act was amended several times, most notably by the Vagrancy Act of 1838 which included several new public order offences.

The Vagrancy Act 1824 is still in force in the both England and Wales and Ireland today, although it is much amended by subsequent legislation. 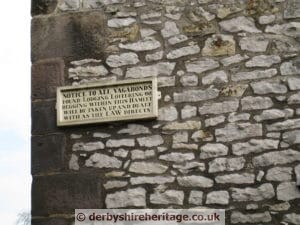 The official Vagrancy Act can be found on the Government website.

From Wikipedia –
“The Vagrancy Act 1824 (5 Geo. 4. c. 83) is an Act of Parliament of the United Kingdom that makes it an offence to sleep rough or beg. It remains in force in England and Wales, and anyone found to be sleeping in a public place or to be trying to beg for money can be arrested.

Contemporary critics, including William Wilberforce, condemned the Act for being a catch-all offence because it did not consider the circumstances as to why an individual might be placed in such a predicament.”

An Early Day motion 903 was tabled in 05.02.2018 to repeal the act stating that –
“That this House expresses grave concern over the continuing use of the Vagrancy Act 1824 to criminalise homeless people who are rough sleeping; notes with concern that this Dickensian law was used 1,810 times in 2016-17; welcomes that this Act is no longer in force in Scotland and Northern Ireland; and urges the Government to repeal this harmful and out-of-date legislation across the whole of the UK.”