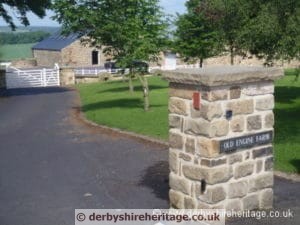 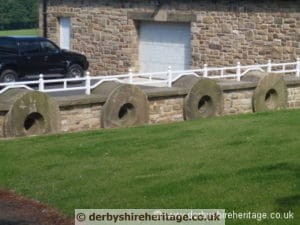 Pulp millstones wall at Old Engine Farm stands on Holestone Gate Road near Ashover and has two claims to fame. As shown above there is a wall at the bottom of the drive with pulp millstones set neatly into it. This type of millstone is much wider than ‘normal millstones’ and was used for pulping paper by running on their flat edge. The cores which were cut from the centres but not wasted as for example they were utilised in walls, such as the one at Darley Dale and in a cottage porch at Birchover.

The second claim to fame is that New Engine shaft west of Cocking Tor and 365 yards deep was sunk and had a steam engine installed to help dewater the nearby prolific Gregory Mine.