Shrine on Goyts Lane – SHRINE to THE BLESSED VIRGIN MARY on Goyt’s Lane above Errwood reservoir
Located by the roadside at SK029753, set onto the wall on Goyt’s Lane near Buxton.

Goyt’s Lane runs from the A5004 Buxton to Whaley Bridge road and descends the Bunsall Incline to Errwood reservoir. 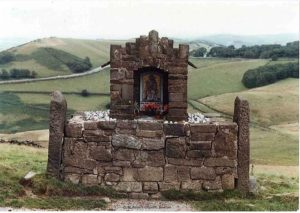 The shrine before the wall was rebuilt 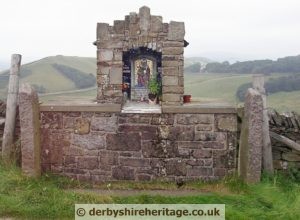 The shrine is now looked after by a Buxton church.

It is regularly adorned with fresh flowers placed in the niche.
The history of this beautiful roadside shrine has been illusive and impossible to research in depth. I know from personal experience that there is some false information out there and following a comment about my original web site information being incorrect I made efforts to rectify this. Fortunately St Anne’s Church in Buxton have retained records of its history Which form the basis of article plus a new, up to date and correct web page.
In May 2002 Colin Butterworth came across the shrine, whilst researching a new itinerary for ‘itineraries for independent travel’ at www.itforit.com. Wanting to know more about its provenance he made unfruitful enquiries at Buxton Tourist Office and Peak District National Park and finally wrote to St Anne’s Roman Catholic Church. Fortunately the church was able to give him the details of two people who were involved in its construction – namely Brian Foxton who lived in Florida (later moved to Canada) and Ian Stewart at Macclesfield.

The original shrine on goyt’s lane was the idea of Canon Baldwin of St Anne’s Church in Buxton, he contacted the local Council, who raised no objection to the idea. This was in the 1950’s.
Canon Baldwin paid for the original mosaic. Brian Foxton collected rocks from the stream below the site for its construction. Considering the local terrain this must have been a difficult, energy sapping task but he persevered and built the shrine with his own hands. He built it in a gateway, which had fallen into disrepair, between two gateposts claiming that the shrine was the first to have been built on public land since the Reformation of the early 1500’s.
The shrine was and still is regularly adorned with fresh flowers, these being placed by anyone on an ad hoc basis.
After standing for over 40 years it had started to suffer from the ravages of time. To add to this disaster struck in the late 1990’s when a lorry damaged the shrine after skidding on ice.
In 2002 the shrine received much needed repair and refurbishment. Ian Stewart funded the replacement of the mosaic, by Steven Rose and based on the original design and the inscription was reused.

To add the the written history of this site, in December 2002 Brian Foxton gave several black and white photographs via Ian Stewart to St Anne’s Church which show the original shrine being blessed.
Apart from the historical record of the time they give a view of the surrounding terrain to compare with today.

This information was generously provided by St Anne’s Church, Buxton. Without it the history of the shrine would have been difficult to find as anyone who has searched literature and the internet will know.