In Spital cemetery there is a stone dedicated to one of the priests who served in the leper hospital.

Historically, people with leprosy were outcasts, treated with great suspicion and usually forced to leave their homes and settlements and live away from everyone else in ‘leper colonies’ depending on begging and charity to survive. Leprosy sufferers were also made to wear special clothing to let others know they had leprosy, to walk away from others, and to ring bells to advertise their presence. Many churches had a narrow window, sometimes called the ‘lepers window‘ which were left open during services so that infected people could take part without having to go inside the church. 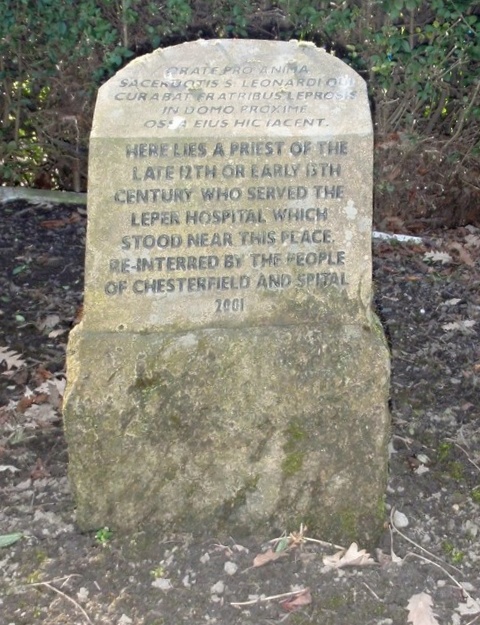 Lazar houses (named after Lazarus the leper, mentioned in the New Testament as being healed by Jesus) were built in isolation on the outskirts of towns throughout England. These were isolation hospitals where lepers would live a monastic type of life as they were generally run by monks. Between the 12th and 15th centuries, the monasteries set up more than 200 leper hospitals in England.

It has often been said that other ailments were confused with leprosy in the Middle Ages. Certainly the disease can be hard to recognise in the early stages. However, medieval physicians were well versed in the works of Galen, who gave clear and precise descriptions of leprosy. No doubt mistakes were made, but there is evidence of considerable caution in diagnosis. This is understandable. Committal to a lazar-house was a sentence of living death. Lepers underwent a symbolic funeral on admission, in which they were declared dead to the world, born again to God. It was as much a prison as a hospice.
Lepers could own no property, so their wills were carried out immediately. A bequest to the hospital would help to ensure their future comfort, but most would have little to give.

It is known that before the year 1195 there was an ancient hospital for lepers at Chesterfield, dedicated to St. Leonard a French hermit a most popular saint with the Normans, to whom leper hospitals were frequently dedicated in recognition of his special care for the sick. The site of this hospital was at Spital (The name Spital can be found in many towns in England and the word derives from the early hoSPITALs found at that location). This was near the River Rother, about half a mile south-east of the town across the river as was often the case.

In Tudor times ‘leprosie’ was just one of the diseases said to have been cured at St Anne’s Well in Buxton.