It is a scheduled monument.

Historic England –
Bassett Wood bowl barrow is a well preserved sub-circular earthen barrow situated in the southern fringes of the Derbyshire Peak District. The monument includes a mound measuring 29m by 25m by c.1m high, and the surrounding construction ditch which is c.3m wide and buried under accumulated soil and debris. During a partial excavation carried out by Thomas Bateman in 1845, a grave-pit was found covered by a limestone floor strewn with charcoal. Inside the grave were the remains of a cremation burial indicating a Bronze Age date for the barrow.

Although partially disturbed by excavation, Bassett Wood bowl barrow is a well preserved example containing further significant archaeological remains. Unusually for the Peak District this barrow is known to be surrounded by a ditch. 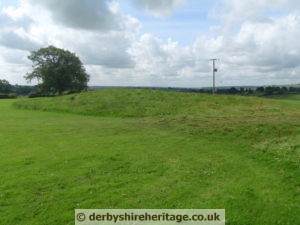