BIG MOOR RECONSTRUCTED CAIRN – SK279756
This Derbyshire cairn was excavated in the 1960s having been previously disturbed, like many in this area, by antiquarians. During excavation, fragments of cremated bones and pieces of pottery from a collared urn were discovered in the centre, along with an urn covering the cremated bones of a child. Four stones, now in the store at Sheffield Museum, were also found to be decorated with pre­historic cup and ringmarks. 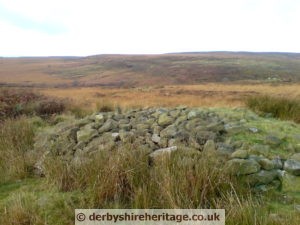 Cremation burials were found within both the main cairn and the platform. Several of the larger Big Moor reconstructed cairn stones also had cup and rings carved into them. Another nearby cairn with what looks like the remains of a central chamber, seems to have a small leaning stone midway between it and the stone circle.In fact, there are at least sixty cairns in the near proximity. Many are now no more than low rocky hummocks partly lost beneath the heather and reeds, but others retain much of their original shape and size. Most are circular, some less obviously so, and some have larger kerbstones around them.
Buried beneath one of the Cairns was a polished stone axe, which was found to have come from the Langdale Pikes in the Lake District.