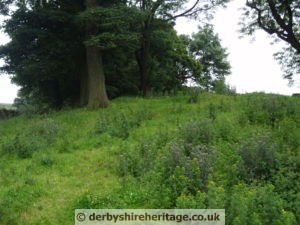 Round Barrow, Scheduled monument 13316:The bowl barrow at Bostern Grange is a roughly circular cairn with a hilltop location in the south-western ridges of the limestone plateau. The monument includes a mound measuring 23.5m by 19.0m, the breadth having been reduced slightly in the past by ploughing. It stands at an approximate height of 1m. A Bronze Age date was assigned to the barrow after a partial excavation, carried out by Thomas Bateman in 1845, revealed a very large central cist containing a crouched skeleton and a smaller cist which contained the remains of a cremation.Two further skeletons were found higher in the cist, above the crouched inhumation and the cremation. These would have been secondary burials and indicate an extended period of use for the barrow.