Constructed circa 2000BC to 1500BC and consisting of six standing stones, approximately 6m by 4.5m in diameter with five stones of similar size and height and one smaller wider one all no more than a metre in height, with an adjoining cairn. after Ash Cabin Flat, it is the second smallest circle in Derbyshire.

A low prehistoric cairn with a central rectangular stone setting was added later at the eastern end of the circle. In 1993 it was incorrectly reconstructed by persons unknown and wrongly changed to fourteen standing stones. Fortunately it was subsequently reconstructed correctly by English Heritage and the Peak National Park Authority.

Doll Tor was first recorded by Thomas Bateman, when in 1852 he describes a circle of six stones, two of which had fallen. In one afternoon, Bateman and his companions had cleared a space in the centre of the enclosure and discovered a grave containing three or four cinerary urns and as many cinerary cups. Some of these are now housed in the Sheffield City Museum.

The site remained forgotten and untouched until local Birchover archaeologists J.C. Heathcote and his son J.P. Heathcote excavated it between 1931 and 1933. They rediscovered the stone circle and after further excavations they discovered both plain and decorated cremation urns containing the remains of adults and children, along with other funerary goods such as small pieces of unburnt bronze, scrapers and a couple of unusual faience beads, one star shaped and one segmented. Faience beads, dating to the Early Bronze Age, were made from a glass-like material and were once thought to have originated in distant lands but in recent years are believed to have been made locally in Britain. The Heathcotes uncovered burials at the base of four of the standing stones as well as a number of others in the cairn mound to the east.

It also appears that the damage done in 1993 was not the first time the stones of Doll Tor had suffered at the hands of vandals as Heathcote reports that before excavations in the 1930s were completed, three of the standing stones were maliciously damaged by some unknown persons. Two of the stones were smashed to pieces and had to be cemented back together with considerable patience. 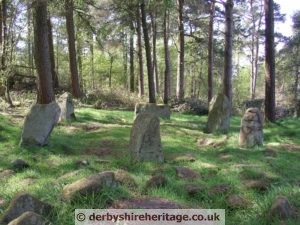