Park Gate stone circle is an embanked stone circle at the northern end of a cairn field a typical Derbyshire Bronze Age stone circle.
The circle is made up of ten stones about 0.5 to 0.9 m high in the circle around 12m diameter and another completely buried stone to the north west. There are four smaller stones on the site, Barnatt suggests that these may have been part of a kerb rather than actual standing stones. If the stones were evenly spaced, there may originally have been as many as twenty in the circle.

The larger stones range between about 0.5m and 0.9m in height, except for one lying to the south which leans badly and has all but collapsed. This stone would probably have been well over a metre in height originally. It has what looks like a possible cupmark on one of its edges but this is thought to be a bullet mark from the moor’s army training days. The bank, difficult to see in parts, is between 1.5m and 2.5m wide and 15m in diameter. It is clearest to the west and south-west. . 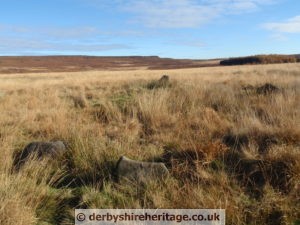 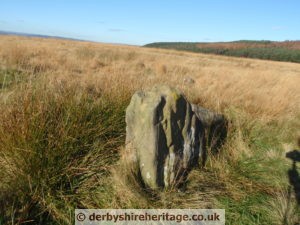