Seven Stones of Hordron Edge stone circle actually consists of nine standing millstone grit stones and one recumbent stone, in a ring about 16m in diameter. In fact, counting all the smaller stones on site, there are twenty-three in total.

However, archaeological evidence has revealed that originally there may have been between sixteen and twenty stones. Unlike most of the other circles in the Peak District, Hordron Edge is a free-standing circle having no embankment. However, all the stones are typically Derbyshire in style, all being less than a metre in height.

Again the largest stone stands to the south-west, but here it is only marginally taller than the others. Most of the stones show signs of weathering. The Seven Stones of Hordron also witnessed tampering by ‘persons unknown‘ in the early 1990s. In 1992 one of the stones, which had previously been buried was re-erected.

Following this, John Barnatt, Senior Survey Archaeologist for the Peak National Park Authority, in consultation with English Heritage, re-excavated the area around the new stone and undertook a survey of the whole circle. It was established that the previously buried stone was covered largely with peat, suggesting it had been covered for some time, perhaps falling in prehistory or deliberately felled in Medieval times when the site was used as a boundary marker.

During the 1992 excavation other buried stones, of a similar size to the orthostats, were discovered with between three and five new ones identified. Examination of the site also showed that it might have been terraced to create a level interior.

This procedure is also apparent at other Peak District sites, both embanked and free-standing, including the Nine Ladies and Stanton Moor III, Bamford Moor South, Barbrook I and Froggatt Edge stone circles.

The tallest stone of Seven Stones of Hordron Edge is known as the Witch. 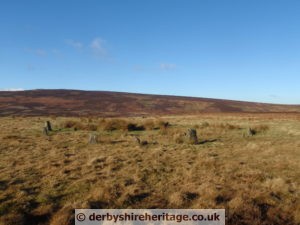 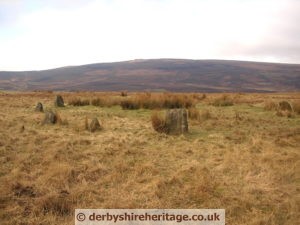