Stoke Flat stone circle found at SK249768
Also known as Froggatt Edge stone circle it is just off the Froggatt Edge footpath. It is an embanked stone circle with two entrances. The bank is 2m wide, 11.5m internally. The majority of the stones are typical of Derbyshire stone circles at about 0.5m high, with one at about 1m high. It consists of around 11 typically small Derbyshire stones, most about half a metre tall with only one that reaches just over a metre in height. The circle has two opposing entrances – the one to the north-northeast could have been blocked at some time in prehistory while the one to the south-southwest is flanked by the tallest stone of the circle.

The site was partially excavated in the early 20th century by the Duke of Rutland and E H Peat his gamekeeper but nothing was found. 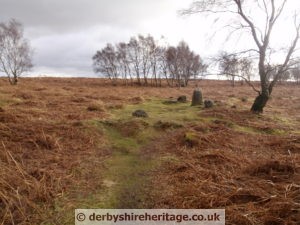 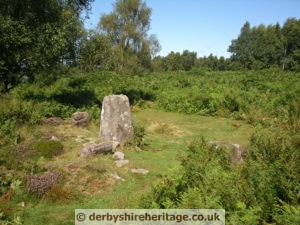