Wellington’s Monument on Baslow Edge is dedicated to the Duke of Wellington as a celebration of his victory at the battle of Waterloo in 1815. It was erected by a local man, called Dr Wrench, who as an army man and felt the need to counterbalance the memorial dedicated to Admiral Nelson on nearby Birchen Edge. 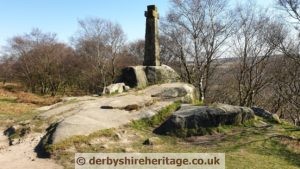 Described on Derbyshire War Memorials website as – A gritstone ashlar cross on a square gritstone pedestal founded on a natural rock outcrop. The inscription is incised in upright capitals on the arms of the cross and on the pedestal.

Some lettering is difficult to decipher as it is becoming increasingly eroded and illegible.

The memorial commemorates Arthur Wellesley, Duke of Wellington, and his military achievements and was provided to complement Nelson’s Monument on Birchen Edge two kilometres to the east. Although the two may have been intervisible when constructed, Wellington’s Monument is now surrounded by trees and bushes and is only visible from close range.