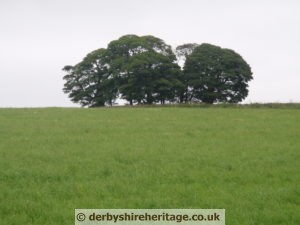 Sharp Low Bronze Age bowl barrow located at the end of a prominent hill at SK160529 near Tissington. The mound is 6m x 18m x 14m enclosed by a stone wall with thin tree cover. Excavation by Bateman in 1848 revealed two crouched skeletons. Finds also included a bulls horn. Scheduled Monument 13322.Sharp Low bowl barrow is a sub-circular cairn in a hilltop location in the south-western ridges of the limestone plateau of Derbyshire. The monument includes a well preserved mound measuring 18m by 14m and standing c.0.6m high. Partial excavation carried out by Thomas Bateman in 1848 revealed two crouched skeletons which indicate a Bronze Age date for the barrow. At the centre of the barrow was a stone underneath which lay a bull’s horn and another bone. Close to the westernmost skeleton were found pot sherds and animal bones and also an iron knife bearing an impression of the fabric in which it had previously been wrapped. The knife indicates the re-use of the barrow in the Anglian period. Excluded from the scheduling are the walls crossing the edges of the monument, although the ground beneath them is included.