This is one of the largest stone circles in the Peak District, but is formed from the smallest stones. It is oval in shape, about twenty-six by thirty paces in size and is made up of about twenty tiny stones, which barely raise themselves above the level of the moorland grasses. Inside is a very flat platform free of all stones. There appears to be no surrounding bank, no interior cairns and all the circle stones lean markedly inwards towards the centre of the circle, resulting in a monument rather different from the others which are dotted about these moors. Perhaps it pre­dated the others, although there are the remains of one circular, presumably Bronze Age cairn close by.
It is very rare in that given the large number of stones involved and it appears to be almost complete. 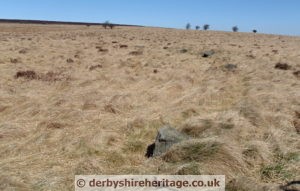 This circle is awkward to find (and photograph) because the stones are so small and tend to be almost covered over by the grass at any time of the year. In many ways it is not as spectacular as Barbrook I or Barbrook II but nevertheless has its own special properties.
↑ Click to access the login or register cheese
Please Don`t copy!!! Just ask if there is anything that you want