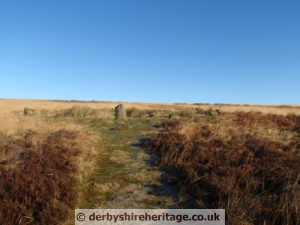 Barbrook I stone circle is to be found on Barbrook Moor which has a number of stone circles of varying quality. Barbrook I, Barbrook II and Barbrook III are the best examples to visit.
Barbrook Moor I is one of the best preserved stone circles in the Peak District and a typical example of an embanked stone circle.
There are 12 stones in a ring varying in diameter from 12.5 to 14.5 metres in an example of a flattened circle.
>A worn rubble bank, 19m by 17m in diameter, surrounds the circle of stones, 12.5m by 14.5m. but is not a prominent feature.
Only one stone rises above a metre in height, and it is quite markedly taller than the others and a gap in the ring exists to the northeast, which may originally have contained one more standing stone
The remains of two trenches dug earlier this century by the Duke of Rutland’s Gamekeeper, E.H. Peat, are still visible inside the stone circle. During this excavation, only a few flints, now in the Buxton Museum, were discovered. These trenches along with the ditch were also re-excavated in 1987, in order to recover further environmental evidence.